How are brands using interactive and 360-degree video to improve consumer engagement?

In an age of attention scarcity where consumers are able to fast forward through television adverts, while simultaneously flicking through their Facebook feed and chatting on their mobile, it raises the question – how do brands create adverts that stand out from the crowd and make their consumers stop, listen and engage?

While online content presents an amazing opportunity for brands to do this, they still have their work cut out for them, as consumers (namely millennials) have developed the skill to call B.S. faster than ever. They consume copious amounts of content, but lose interest in under 10 seconds, especially if it is not relevant or thought provoking, according to an article by News Cred.

So how do brands break through and encourage engagement?

Unfortunately, no one has the answer to that million-dollar question! It does however seem that there are a few new technologies paving the way to make it easier for brands to really connect with their audience, allowing them to be inquisitive, explorative and control the content they see for themselves.

Specifically, we want to touch on VR and 360-degree video. Many brands are already exploring VR and 360 video as storytelling platforms either across social media platforms or in live events. Our favourite examples of these are by North Face, Old Irish and Coca Cola.

North Face and Old Irish utilised 360 content and VR goggles as part of wider experiential activations. Similarly, both brands encouraged consumers to immersive themselves into their VR world, while unbeknownst to them their real world transformed around them. Both activities were designed to surprise and delight consumers, giving each user a truly unique and unforgettable brand experience.

Coca-Cola’s Mother’s Day content, shows a different way of effectively using 360 video. In this instance they utilised it as an online experience which they shared across their YouTube and Facebook channels. A powerful and emotional piece of content which allows the viewer to view several interactions between a mother and daughter. The use of 360 here allows the viewer to switch between the mother’s or daughter’s point of view, a simple technique, which really forces the viewers to strongly empathise and relate to each character. 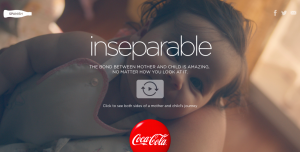 Another tech which seems to be on the rise, with similar benefits to 360 and VR, is interactive video. Companies such as WireWax now provide a tool which allows users or brands to make their content interactive. The platform allows you to add motion-tracking hotspots to people and objects in video, and once these hotspots are added, users can then connect hotspots to anything online – video-in-video, images, editorial content, product information, applications and much more. Brands already making the most of this feature include Dulux, Honda and Sure. 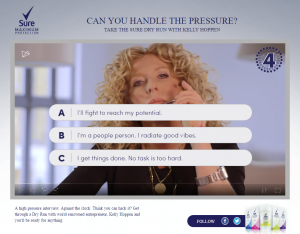 But why? The metrics speak from themselves with evidence to suggest that interactive videos generally achieve the following results:

So what do we think? Are 360, VR and interactive video here to stay and should brands be making the most of them? In our opinion – of course! With brands prizing immersion more than ever, each offer a powerful way for the user to experience a narrative, affording brands opportunities for more immersive, user-controlled storytelling practices.