Making the Most of Brexit

The extent to which the British media has been fixated with Brexit for the past two years has become almost comical. Savvy brands are taking advantage of this by joining the conversation and offering commentary about anything from work and travel opportunities to the general state of Britain after we leave, making it hard not to worry about what the future holds.

So, if you don’t know whether to laugh or cry about the current political state of Britain, join us in briefly taking a lighthearted view, and sharing some of our favourite stunts all capitalizing off Brexit.

Everyone is familiar with the big red Brexit bus deployed by the Leave campaign. Thick black size 200 font spouting the infamous slogan “We send the EU £350m a month, let’s fund our NHS instead” (later discredited). The media buzz generated by this was enough to start a chain of branded stunts following the Brexit Bus theme:

Of all the things to worry about post Brexit – Three want their customers to know that roaming charges shouldn’t be one of them. Their bus states that they will foot the estimated £187m roaming charges bill if Britain does end up leaving the EU.

In 2013, Three dropped roaming charges altogether and it became their core marketing message– the stunt itself works to highlight that customers can still use their devices abroad without any additional fees. 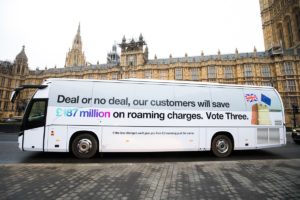 This particular stunt was purely politically motivated – parking the bus outside Westminster, the charity said their aim was to highlight the ‘lies’ told by the Leave campaign and push the truth to the forefront of the media. The ‘Time for the Truth’ slogan was covered with more than 10,000 stickers which contained questions for the government from members of the public. 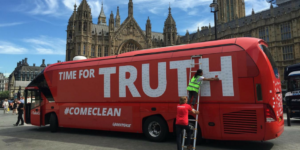 This fintech start up used a version of the ‘Brexit Bus’ to promote their launch in Europe. Using a blue bus allowed them to stay on brand and stand out amongst other big red Brexit buses that were launching.

The mobile-only banking service used this clever ploy to engage a younger audience by incorporating an issue that’s important this group (over 70% of 18-24-year olds voted remain). 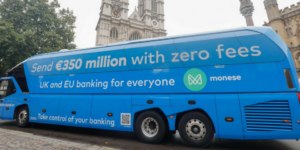 ‘Take back remote control’ was used by Channel 4 to promote their programme starring Benedict Cumberbatch about the questionable tactics used by the ‘Leave campaign’ during the referendum in 2016. The installation was taken all over the UK – unlike other activations which remained in London.

Many people argue that the Brexit bus and its bold claim about the NHS was what swayed the referendum for many – so it’s easy to see why so many marketing stunts have followed in the same suit. If a bus can influence people’s voting habits, then surely it can entice them to watch a TV show?

Costupper was a pop-up in Peckham launched by the People’s Vote campaign for Black Friday which sold the ‘worst deals in Europe’. At the ‘inconvenience’ store you could get some Price-Up Krispies, Conman’s Mustard, grab a copy of The Hard Times and check your diminishing bank balance. The familiarity of a corner shop combined with the reality of Brexit is a perfect example of marketing teams drawing attention to a subject of notoriety. 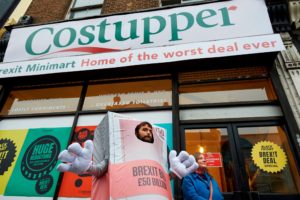 If you’re looking for an outlet for your Brexit frustrations, Gymbox has a class for you! Their Brexit inspired fitness class has a circuit featuring a Boris Johnson punching bag, ‘Corbyn Ju-Jitsu Throw’ weight-throwing, ‘The Jacob-Rees Logg Lift’ and ‘The Theresa May Sack Race’.

A humorous approach to Brexit that’s highly topical amongst its central London members and allows people to sweat out their worries whilst getting fit at the same time. 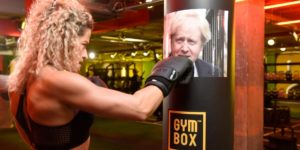 The international betting company released some provocative pieces in Ireland drawing similarities between the drawn-out Brexit negotiations and the rugby rivalry. One read, “Dear England, sorry for he last two years of pain, suffering and humiliation. Another 798 and we’ll be even – PaddyPower”.
In addition to these posters, Paddy Power also launched a pop-up passport office, a reference to the surge in Irish passport applications following the referendum. 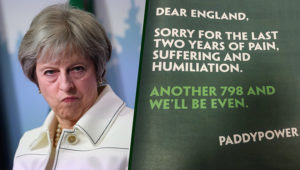 With Brexit still at the core of all political and social debates (and the deadline extended), we’re sure there are many Brexit-themed stunts to come and we can’t wait to see which brand tackles it next!